Any office, any shelter or any roof,
Not always practical, not necessary profitable or not even a support of experimentation,
But so iconic!

Other « towers » along my route. 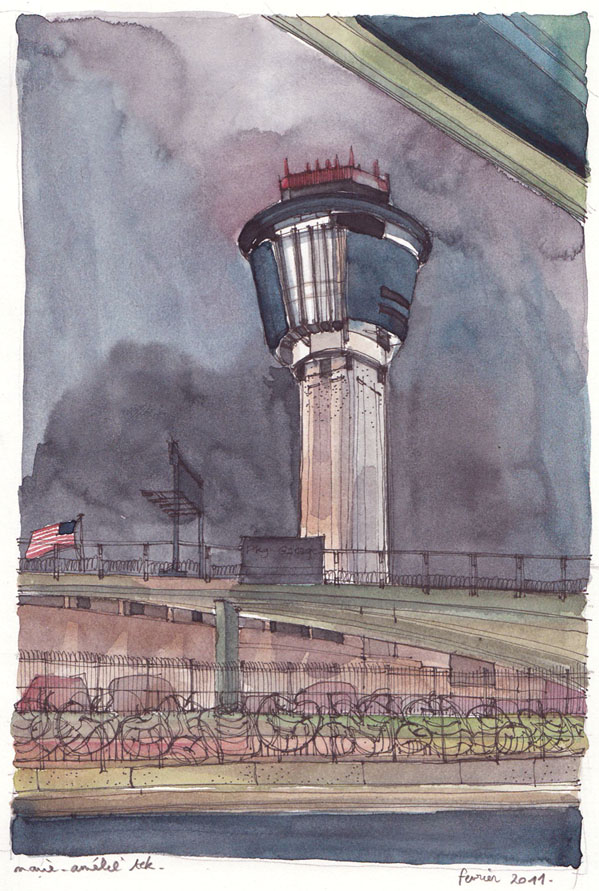 At 555 feet, 5-1/8 inches (about 170 m), the Washington Monument was the tallest structure in the world when completed , and remain the tallest made of masonry. It now seems so obvious, so perfect, so timeless, that it is hard to imagine when this symbol of Washington – both the president and the city – was far from a certainty.
A slight shift in the color of the marble about a third of the way up indicates the height at which construction was halted for nearly two decades. On December 6, 1884, the aluminium capstone was finally set and the monument was dedicated. It remains one of the noblest memorials ever erected.

This present view is taken from the « bell tower » of the Nancy Hanks Center/Old Post Office Building (Willoughby J. Edbrooke, 1899).
In the foreground, the Ariel Rios Building (Delano & Aldrich, 1935) 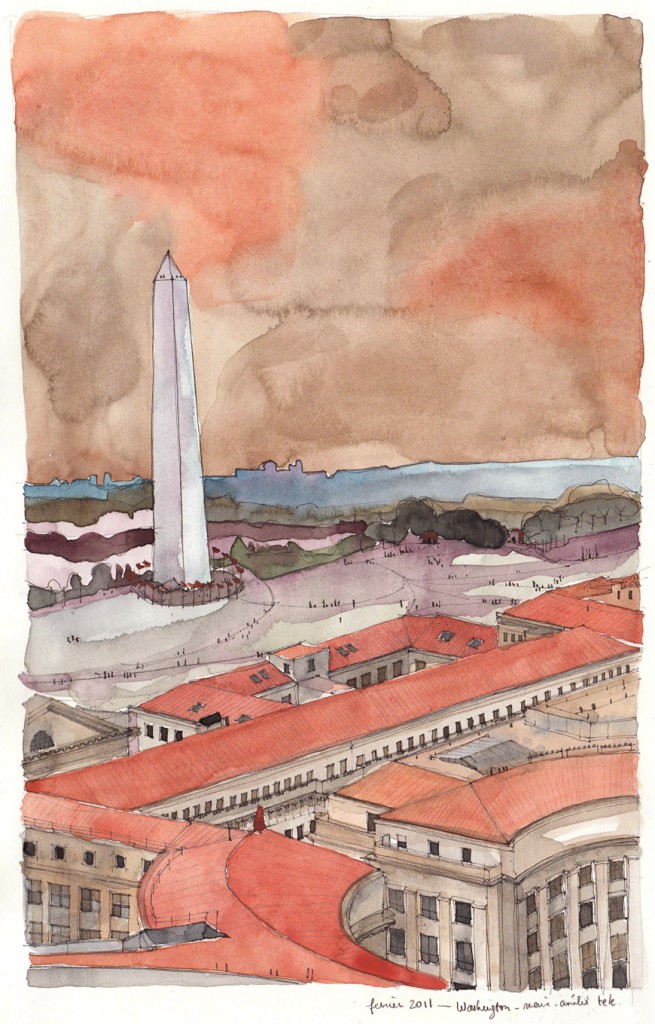 For his commission to create a sculpture for the Social Security Administration building, Claes Oldenburg selected the baseball bat ad an emblem of Chicago’s ambition and vigor. The sculpture’s verticality echoes the city’s dramatic skyline, while its form and scale cleverly allude to more traditional civic monuments, such as obelisks and memorial columns. The pattern of the sculpture’s crisscrossing structural latticework forms an elegant silhouette against the open sky. 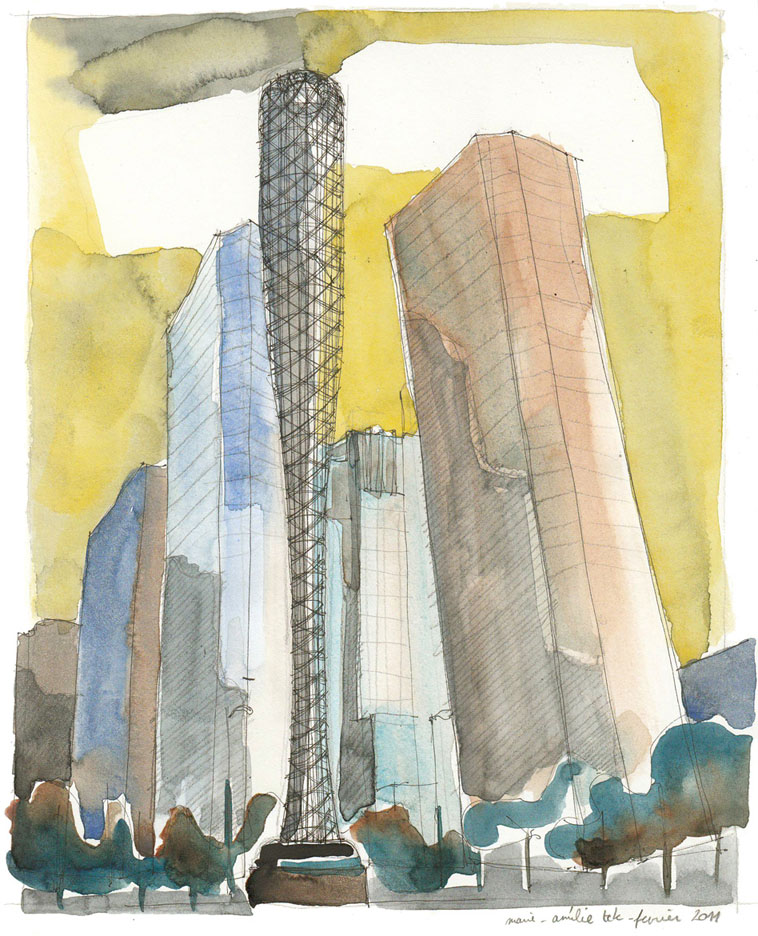 Built in 1828 by the Phoenix Shot tower Company, this soaring 215-foot structure is the last remaining shot tower of the three that accented Baltimore’s skyline in the 19th century. Shot pellets used as ammunition for muskets were produced by pouring molten lead through perforated pans form “dropping stations” high up in the tower. The swift passage of the lead droplets down the shaft rounded the pellets into shot. The “quenching tank” of water at the bottom cooled and solidified them.
The Tower produced as many as 500,000 25-pound bags of shot a year, and was one of the largest suppliers in the nation. Despite technological improvements, the principle of the “drop method” is still applied in the production of small shot. Modern towers less handsome and less sturdy have sprouted up in California, Illinois and Oklahoma.
Shot was produced here until 1892, when rising costs forced the owners to abandon the tower. When the tower was threatened with demolition in 1921, a group of citizens purchased it and presented it to the City of preservation. It was converted into a museum in 1977 and forms the centerpiece of Shot Tower Park, in startling contrast to 9 North Front Street, the historic house at its side. 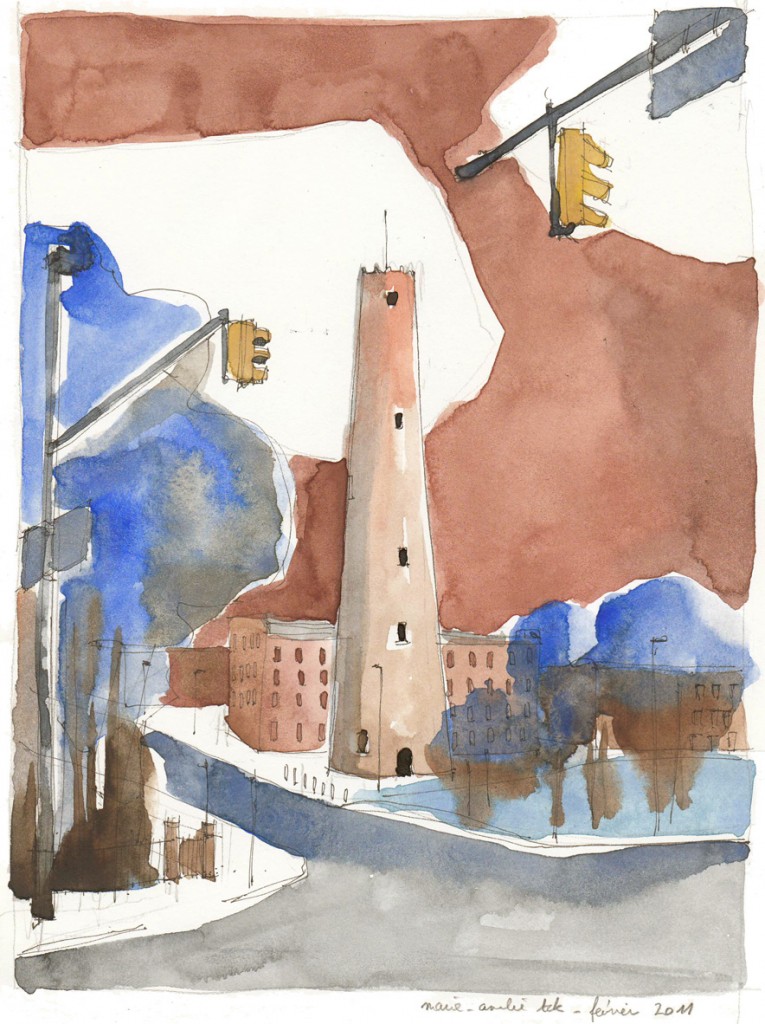 A gracious Ellis Fantasy of mixed pedigree. As at Union Station of Saint-Louis, an engaged mini-tower, topping out in this case at 179 feet. Il maintained pressure for water from the nearby reservoir, built in 1871 and still in service. 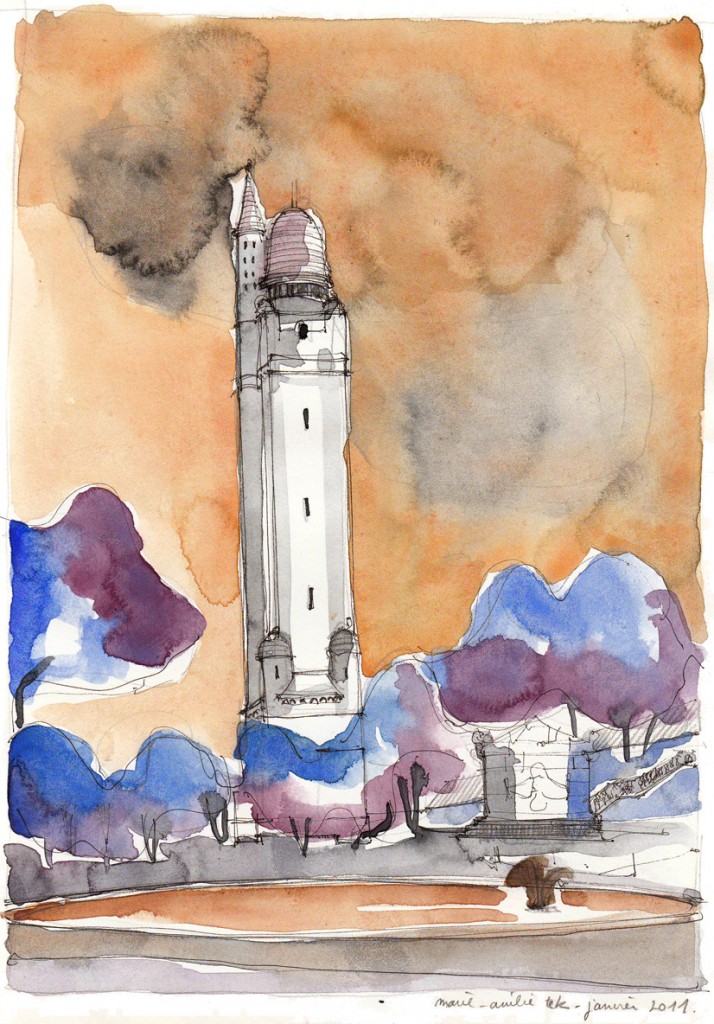 The San Jacinto Monument is a 567-foot high column located on the Houston Ship Channel, Texas. The monument is topped with a 220-ton star that commemorates the site of the Battle of San Jacinto, the decisive battle of the Texas Revolution. The monument, constructed between 1936 and 1939 and dedicated on April 21, 1939, is the world’s tallest monumental column and is part of the San Jacinto Battleground State Historic Site. By comparison, the Washington Monument is 555-feet tall. The “tower” is an octagonal shaft faced with Texas Cordova shellstone, topped with a 34-foot Lone Star—the symbol of Texas. Visitors can take an elevator to the monument’s observation deck for a view of Houston and the USS Texas. The San Jacinto Museum of History is located inside the base of the monument, and focuses on the history of the Battle of San Jacinto and Texas culture and heritage.
The San Jacinto monument is an octagonal column. It was constructed by W.S. Bellows Construction and was primarily constructed of reinforced concrete, and its exterior faced with Texas limestone from a quarry near the Texas State Capitol. It is 9.6 feet taller than the next tallest, the Juche Tower in North Korea. 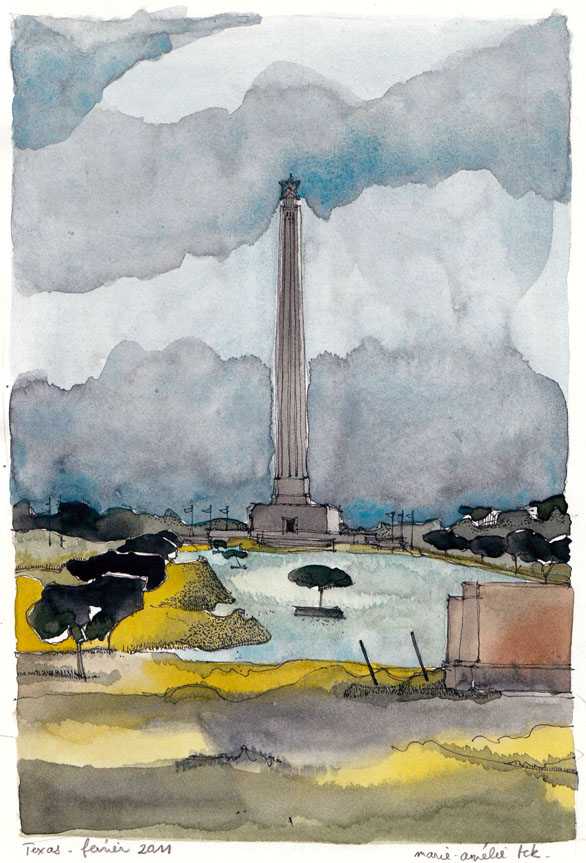 “Brooklyn’s Eiffel Tower”, the last fragment of the vanished Steeplechase Park (Steeplechase closed in 1964; the Last Jump was in 1968).
Happily, after years of neglect, an on going restoration commenced in 2002. Repainted and creatively lightened, plans have been tossed around for a “Parachute Pavilion” activities center at the tower’s base. Look for news. 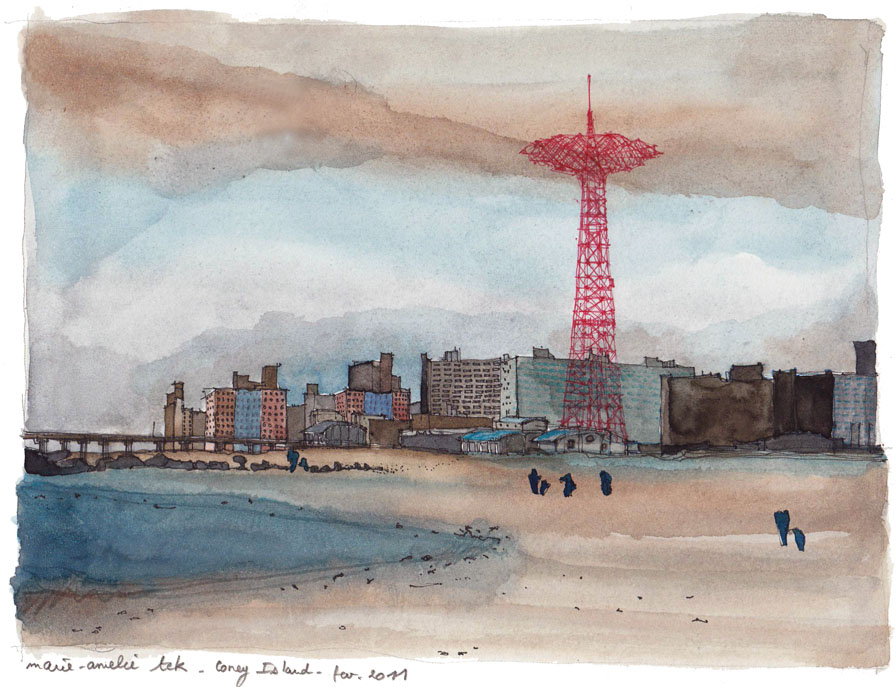 The Wilkens Building (or Marsh and McLennan Building) is so far the only original full cast-iron front to be completely restored. Baltimore was an important center of cast-iron construction by the mid-nineteenth century with several significant foundries in the city exporting cast-iron fronts throughout the world. The structure is one of the city’s last extant cast-iron fronted buildings. The Wilkens Company’s innovative use of cast-iron, the world’s first industrialized, factory-produced building material, demonstrated their progressiveness. Its use as a building material also illustrated the impact of industrialization on the Post Civil War growth of Baltimore’s central business district.
This cast-iron fronted building represents the transition from timber and brick construction, the building’s dominant materials, to a more modern material. During the 1880’s a fifth story was added to the building.

In 1989, the structure was revitalized with a mix of new construction and rehabilitation, by the real estate development firm of Stone and Associates. 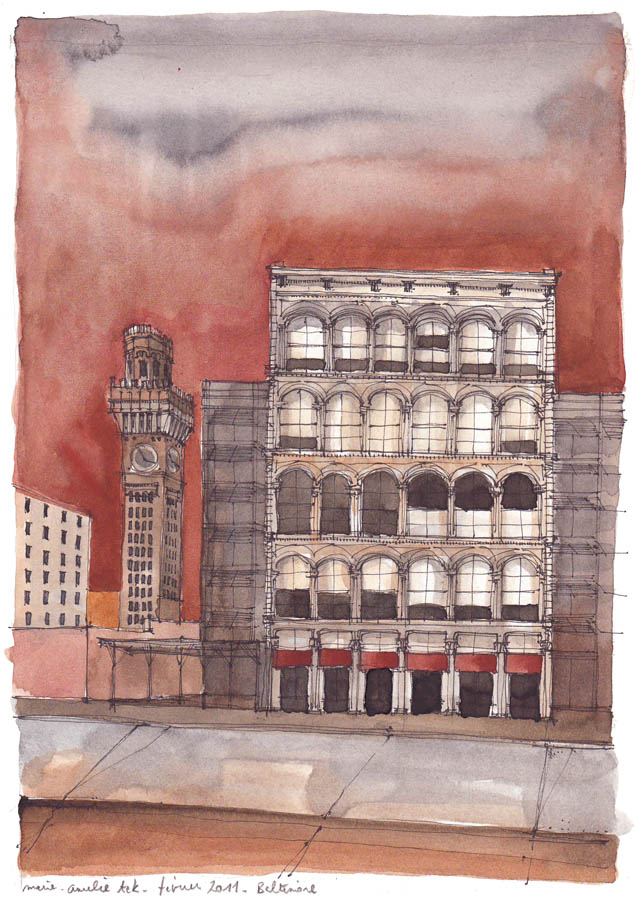 Like Trinity University’s tower in San Antonio, Ford here flares the base and capital to give it an organic feel as a beacon along Carpenter Freeway and on campus. 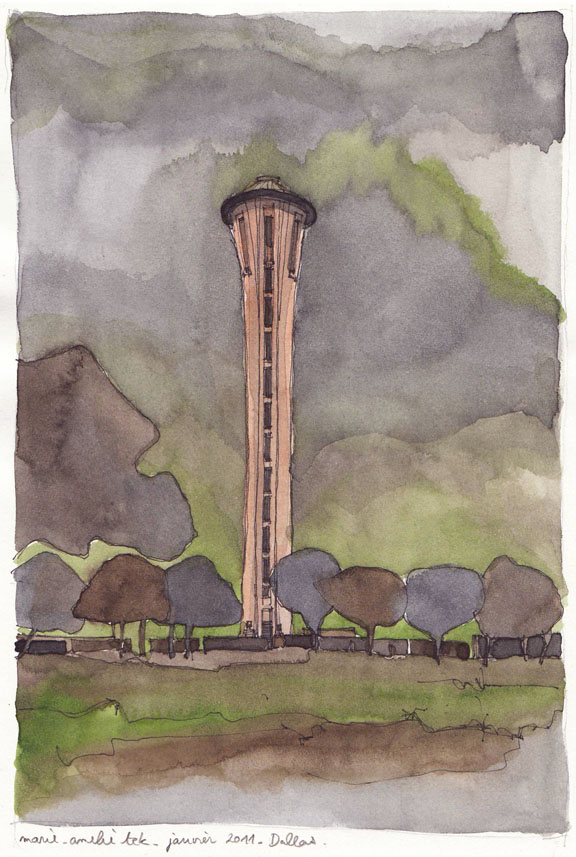 Ready for a space flight? 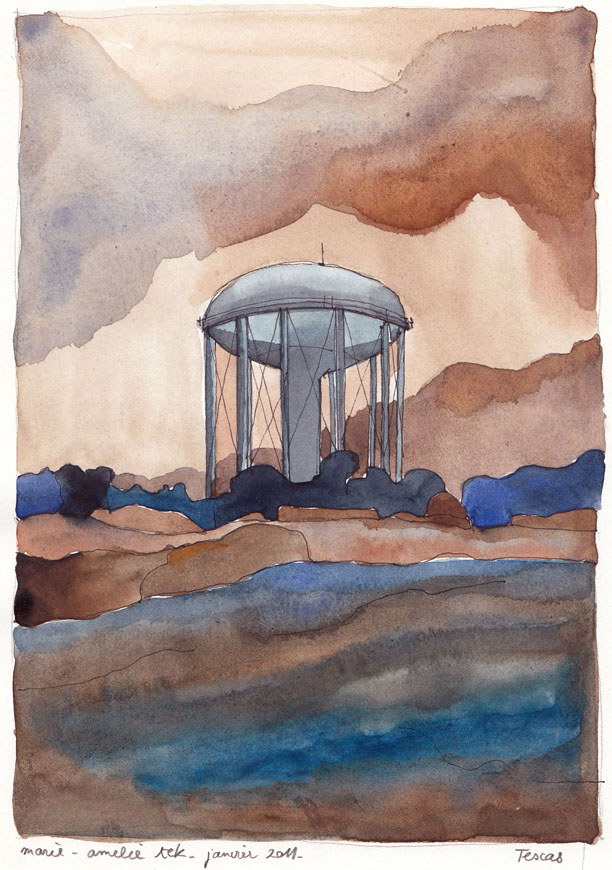 Named for the French and Spanish monastic cloisters imported and reassembled here in concert with a 12th-century chapter house, the Fuentaduena Chapel, and Gothic and Romanesque chapels. Concept and reality are both romantic, and siting at this riverviewing crest and overwhelming confrontation between the City and a Hudson River School painter’s view of – not surprisingly – the Hudson River.

The contents are the majority of the medieval art collection of the Metropolitan Museum of Art; most impressive are the Unicorn tapestries. A Renaissance faire is held here annually.

The tower, of course, is an office building. 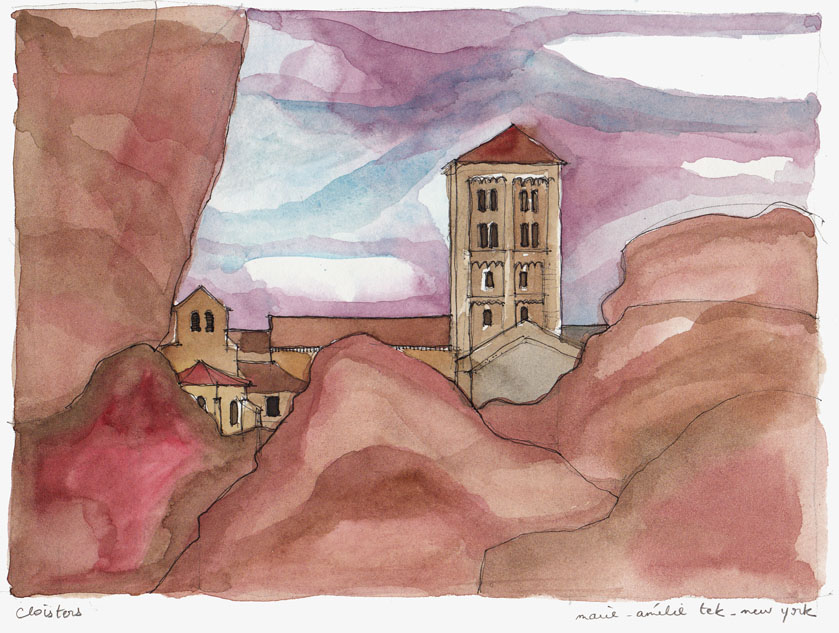